skip to main | skip to sidebar

The Blog area has moved...

I wanted to put a post up to remind everyone that the new blog can now be located on the Lunt Solar website at http://luntsolarsystems.com/blog/

All the blogs from this area have been migrated over..
Posted by Lunt Solar Systems at 9:41 AM No comments: 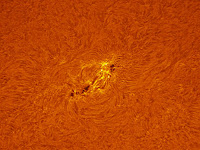 Savio was kind enough to send in an image taken thru one of the special edition single stack LS75F's.
The image was taken via one of David Leong's 15 year old students, and although the filter had only just arrived, the initial shots are very good. I am looking forward to seeing just how good these images will get after a little practive with the filter..
The image was taken the the Lunt 75F mounted on a TMB 80-480 with 2X Barlow, and a DMK21AU04.AS
Unfortunately we sold out of these special edition 75s. There has been many querries for doublestacking the several we sold, and from people who have recently heard about the filters and were looking for availability..
Lunt Solar will be offering limited edition filters throughout the year. These filters will be announced in the upcoming community area of the website (coming next week). Our next special will certainly be a popular one. But, once their gone, their are gone.. At this time there are no plans to release the LS75F Un-obstructed as a standard product and we are not accepting orders for future limited runs ;)
I will be updating the status on the much anticipated LS152T later this week...
Posted by Lunt Solar Systems at 9:09 AM No comments: 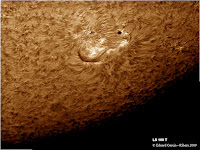 Inside Tucson Business Magazine is a local business oriented weekly publication in Tucson.

They recently came out for an interview and a chance to look thru some of the Lunt Solar scopes. Here is the beginning of the article.....

"Of all the beauty in nature that people take notice of in a day, the largest thing in our solar system may be the most ignored: the sun.

Mothers have always warned their children not to look directly into the sun – and for good reason.
In all of its massive power and size the light given off by the huge burning ball of gas is enough to cause serious eye damage.

For those who don’t want listen to their moms’ advice, Lunt Solar Systems is happy to oblige......."

Image courtesy of Eduard Garcia..
Posted by Lunt Solar Systems at 8:50 AM No comments:

The One Thousand Dollar Giveaway!!! 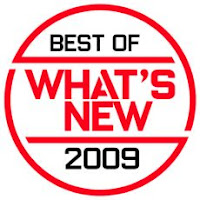 The small contest we were running was closed at the end of 2009.
Thanks to everyone who submitted some great stories and images!!
We will be announcing the top winners over the next week or so, and will be including their submissions in this blog.
All recipients of the Lunt Gift Cards will be contacted via e-mail after their submissions have been posted..
Check back to see is your entry was chosen...
And PLEASE.. Keep the stories, event, and images coming in. We really look forward to receiving them.
Posted by Lunt Solar Systems at 10:25 AM 1 comment: 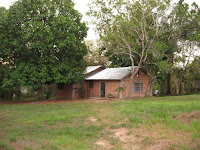 So I live in small town outside Pucallpa Peru called San Jose.

There are probably 500 families that live in the town.
Here is a picture of our house.
It is a 3 bedroom with a tin roof.

The fruit trees that surround it have fruit almost all year. It is wonderful until a piece lands on the roof. BOOM !!! and you jump out of your skin.
We have gotten used to it and now I really like the sound when it rains.
Posted by Lunt Solar Systems at 9:57 AM No comments:

Just a quick heads up that we will be attending the 2010 NEAF Astronomy Show on April 17th & 18th.

We invite everyone to attend this premier event where we will be displaying and demo'ing our latest Solar Products and Accessories.

For more information visit: www.rocklandastronomy.com/neaf.htm
Posted by Lunt Solar Systems at 9:48 AM No comments: 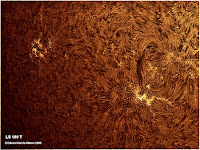 This image is one a few that were sent in by Eduard Garcia-Ribera a few days ago.

Our thanks goes out to Eduard for providing excellent images taken thru an LS100T.

Many may recognize this active region of just a short while ago. We certainly hope that the images will continue to be sent in as the Sun becomes more and more active..

To see more images by Eduard and/or to submit your own images for our photo gallery please visit the Lunt Solar Image Gallery at http://luntsolarsystems.com/galleries.html

We look forward to, and really appreciate, these amazing contributions... Thanks!
Posted by Lunt Solar Systems at 8:17 AM No comments: